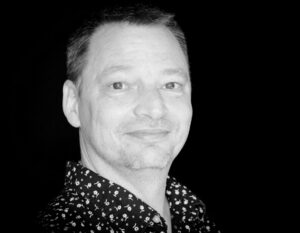 I think most people I’ve met who got into comedy, they didn’t set out to do it. I was working at Max’s Opera Cafe in Walnut Creek. I had broken up with my girlfriend and I was heartbroken. It was the classic “she cheated on me, I didn’t see it coming.” And it just killed me. People would ask me at work, Hey, what’s going on with you? And I would start to explain it to them, in what I thought was a very sincere, vulnerable way. And they would laugh. And I would say, What is wrong with you people? I’m trying to be honest about my feelings — and they would just laugh harder. There was a waiter there that was having some luck in standup. And he’s like, Man, you’re pretty funny. You should come to an open mic with me. I said, What do I talk about? He’s like, tell them about how you’re feeling. I remember the first time going on stage and getting some laughs and it dawned on me, Oh, this is kind of an interesting thing to be able to do, to take this pain and anger and transmute it into something else. That was probably when I was like 23, and I got hooked on it pretty quick.

By the mid-2000s, I was dug in. I was working in the city all the time — I was even starting to close some shows every once in a while. I mean, it was pretty cool. But that was also where I got exposed to a lot of drinking and drugs. In that field, you can do so much and people will excuse it as long as you can just get on stage. I was responsible for 30 to 45 minutes. And if I could show up and do that, then I was fine. And for a long time, I could do that. I could tell myself that I was a success, even though everything — I mean, everything — was falling apart.

For me, it was just this unrelenting feeling of demoralization and sadness that I felt all the time. It didn’t matter how much I drank, or what drug I used, or how great the show was, it just never went away. I thought: There’s something wrong with me, I don’t feel good. Why can’t I feel good? I was ruining relationships, I was not handling my money well, and it was starting to interfere with any kind of real success in the business. And then, I saw people that I had started with, they were showing up on TV, and they were showing up in movies, and they were getting legitimate jobs in the business and my resentment at them started to grow. And once that resentment kicks in, it clouds any kind of success you can have. It was a lot of sitting around drinking and complaining: Why did that person get that? I’m better than them. But they’re not showing up wasted, and they’re doing the work. I wasn’t capable of doing it.

I was living with a girlfriend, but she was paying for everything because all the money I came home with, it just evaporated, it all went to drugs and alcohol. It was horrible. And then in the classic sense of anybody who is in that position, you start to lose things. It happens slowly at first, but pretty soon my life got smaller and smaller and smaller. I lost my car — San Francisco put a boot on it. I couldn’t pay my phone bill, so I lost the phone. I wasn’t showing up for gigs. It was impacting my life on stage, and that was the one thing I said was never going to happen. But now it was not only happening, I was like, Yeah, so what? That gig didn’t matter — it was only 50 bucks, I don’t need it, I deserve more — even though I was broke. At that point, I was probably like 48.

Then there came a really low bottom. I was on stage at the Punch Line. That was where I started and it’s still very family-like. There are people that have literally worked there for 25 years. So I was on stage and I came out of a blackout. I don’t remember what I said — I’ve had people tell me various versions, and I’m sure, sadly, that it’s all true. People in the audience were like, What the hell was that? The next morning, I got a call from the woman who books shows, who I’ve known for 25 years, and she goes, Joe, you can’t come back in anymore, I can’t have you on stage like that, you can’t come into the Punch Line if you’re drunk. And I couldn’t do it. I would show up, and they knew I was drunk. And they were like, Joe, I can’t let you in. It killed me. And I also realized, Wow, I can’t stop drinking. And now I’ve lost this thing that was so important to me: I’ve lost the respect of people in my house.

Things just really accelerated from there. My girlfriend finally gave me an ultimatum — you’re gone in 30 days, no matter what. And I could see in her eyes like man, I gotta go — I really hurt her and she needs me out of her life. And then I thought, Okay, for the next 30 days, I’m going to drink and use as much drugs as I can. And then I’m going to commit suicide. It was a totally irrational idea. But that’s how I thought at the time, and I just went for it.

When the 30 days came up, I had a plan. I went down to Ocean Beach. I had a giant bottle of Vodka and a ton of sleeping pills. And my idea was just to go out into the surf — if I lost nerve, the sleeping pills would kick in and that would be that. I’m there in my underwear because for some reason, in every movie I’ve ever seen you take your clothes off before you go. So I’m in my underwear, I’ve got a jug of Vodka, and I’m crying. And I see two people in the distance walking, and I’m like, Okay, I’m gonna let them pass and then I’m going into the water. And then one of the figures runs up to me. It’s a young woman. And she puts her hand out and points at a ring and says, He just asked me to marry him! And I was like, What? Like, what the hell, you know, and I started cursing her out. And she’s like, You’re really mean. Then the boyfriend runs up and says, You need to talk to women a lot nicer. And then I literally said to them, You have ruined my suicide. I was so angry at them — but that anger is what ended up saving my life.

I thought, Okay, I’m gonna try and find a rehab, I guess. I’ve tried everything else. I was really clear on what I needed: it had to be long term, it had to teach me a skill — because after 25 years as a comedian, I have no marketable skills — and it had to be free. So I Googled, I put that criteria in and it popped up — Father Alfred Center.

It was tough at first. I mean, you’re thrown into this environment where you don’t know anybody. And I’m detoxing and beating myself up for where my life was at the moment. I mean, I don’t think I slept for the first month that I was there. I just couldn’t get comfortable. But they’re good because everything is very regimented. You know, you get up and you go to this building, or you go to this class or you have to be in this room. They kept me busy.

Back then, the way the program was, the first six months you worked in the dining room. You’re working in the kitchen, or the dish room or downstairs in the prep kitchen. It’s not complicated work, but it is physically demanding. That ended up being another moment where things shifted for me. I remember walking in one morning, and Chef Rob — who’s this giant mountain of a man that always has a smile — he was like, Joe! I’m glad you’re here because today is gonna be tough. And it made me cry. Because it had been so long since anybody knew my name, since anybody was happy to see me. And now somebody thinks I’m doing a good job.

And little by little, I just sort of dug in. I decided to stick around. At the end of my six months, they hired me as a dishwasher. It’s hot and it’s wet and it’s physically taxing — but mentally, you can just let your mind go. There were six people in the dish room, and we would have these amazing conversations about sobriety and philosophy and God; you’re washing pots and pans, you’re scraping food off a tray, and the whole time you’re like, Yeah, but did you read that thing about Nietzsche? That was awesome. And a lot of those guys are still in the Foundation.

David Bransten, the head of Workforce Development, would come through and we would chop it up every once in a while. He knew I was a comedian. And he encouraged me to apply for a job opening as a career planner. He needed someone who could be performative, someone who knew what it was like to sit in those recovery classes. As it turns out, I was perfectly trained for this. You’ve got ten guys in front of you who are less than 30 days sober, their arms are crossed, they’re not receptive to any other message they’ve heard before. And then I go in and start joking. And they start laughing. And the arms uncross. And then you slip in just a simple little logical but spiritual idea — and you can see someone thinks about it for a moment.

So it ends up being that all those years I spent on the road chasing some high and chasing some feeling of meaning that I could never get, no matter how good the show was — this is where I find it. At the end of the day after some of those classes, I feel like I float home.

St. Anthony’s saved my life. I’m always going to be grateful for that. I came in because suicide was Plan A and now I have an office. There are mornings I come in, and I’m tired and I’ve got a lot to do. But then I think: I’ve got responsibility because people trust me; I’m encouraged to research things that interest me; I have an office and a paycheck. The list goes on and on. They’ve taken care of me, and I want to continue to be a part of this machine that does good.

Joe currently works at St. Anthony’s as a career planner in our Workforce Development Program.

This site uses cookies to offer you a better browsing experience. If you continue using our website, we'll assume that you are happy to receive all cookies.